Create an Account - Increase your productivity, customize your experience, and engage in information you care about.

The West Nile Virus (WNV) was first found in a febrile adult woman in the West Nile District of Uganda in 1937. The virus became recognized as a cause of severe human meningoencephalitis (inflammation of the spinal cord and brain) in elderly patients during an outbreak in Israel in 1957.

WNV first emerged in the United States in the New York metropolitan area in the fall of 1999. From there it quickly spread across the country.

WNV was first identified in Illinois in the summer of 2001 after laboratory testing confirmed that two dead crows found in Cook County had died of it. Illinois’ first human case was reported in 2002. By the end of 2002, 884 human cases had been reported, 67 of which resulted in death, and WNV would be present in 100 of Illinois’ 102 counties.

That year Illinois reported more cases of the disease and more deaths than any other state. In 2003, the epicenter of disease would begin to move westward and incidence rates in Illinois would briefly drop as only 54 cases of the disease and 1 death were reported that year. There would be 60 cases and 4 deaths the following year. In 2005, Illinois would post the second highest rates of incidence in the nation with 252 cases and 12 deaths. Illinois reported 215 cases and 10 deaths in 2006, the sixth highest number of cases in the United States.

WNV was first detected in Tazewell County in July 2002. That year 23 horses, 9 batches of mosquitoes, 6 birds, and 1 human tested positive for WNV. 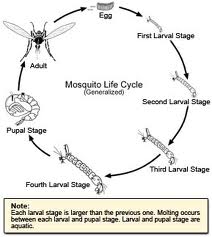 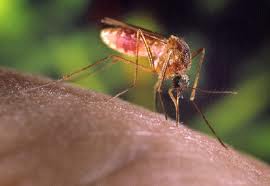 Culex Pipiens is the Northern house mosquito, which transmits the West Nile Virus. These mosquitoes develop in areas such as: overgrown ponds, stagnant and shaded pools, poorly managed waste-effluent lagoons, catch basins, puddles in drainage ditches, and mostly artificial containers. Some artificial containers include: old tires, tin cans, bird baths, and roof gutters. These mosquitoes lay eggs on the surface of the water in groups. The larvae become full grown in 7 to 10 days and the pupae transform into adults in 3 to 4 days.